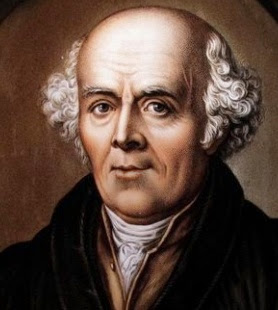 Dr. Christian Fredrick Samuel Hahnemann, a scholar, a translator, an artist and an M.D. in modern medicine was founder of Homoeopathy. While practicing modern medicine he realized that this method of treating patients is doing more harm than good to the patients. He left the practice and started translation job and while on it he found some statements which made him discover what we all know today as “Homoeopathy”. Let us take a look at the chronology of this noble discovery.

Christian Friedrich Samuel Hahnemann was born on 10 April, 1755, at his parent’s home as a third child to Christian Gottfried Hahnemann – a porcelain painter and his second wife Johanna Christiane Spiess.They came to Meissen, Saxony in 1741. Childhood of young Samuel seemed essentially carefree. His father raised all of them in a very stern and structured way. His father used to lock Samuel in a room early in the morning giving him a task to solve and checking on him in the evening to check the result.

He started attending school at the age of 12. In 1770 he was sent to Leipzig to begin studying Business commerce. He came back as he had a very less interest in the business. So his father sent a letter of request to the Elector Friedrich August III to accept his son into a very prestigious Electoral school which was providing free education for children of low – family income. His request was granted and Hahnemann attended that school until 1775 under Magister Mueller. He worked as an assistant to him in return to which he was given shelter. This what looked like easy work can be seen to have been quite a burden for Hahnemann when combined with high academic requirements. He later wrote about his academic life that ” it was so heavy that I often became sick and once almost died.” In addition to his language studies, he had access to classical Greek literature, such as of Hippocrates and Galen which proved very useful to him in future. It was the motto of the school “Sapere Aude” means “Dare to Know” also proved fitting one for him throughout his life. In May 1775, he moved to Leipzig again to begin his medical studies.

According to the University of Erlangen’s register, Hahnemann started studying medicine in Leipzig on May 22, 1775. He earned his living by translating and teaching in German and French. Due to his engagements in other activities, he missed his clinical bedside studies and therefore moved to Vienna to study further with Joseph Freiherr von Quarin, who was medical director of a hospital in Leopoldstadt. With him Hahnemann gathered plenty of clinical knowledge. In August 1779 he defended his doctoral dissertation on “Reflection on Etiology and Therapy of Spasmodic Diseases” and received his doctorate degree.

In March of 1781, Samuel hahnemann arrived in Dessau to practice the art of manufacturing medicines with the pharmacist Haseler. He stayed there for 9 months. Within these 9 months he married to the stepdaughter of the pharmacist, Johanna Leopoldine Henritte Kuchler on 17th day of November in 1782 according to the record of the church os St. Johannis in Dessau.

Hahnemann lived in Dressden, the capital of Saxony from 1785 to 1789. During his time in Dressden, Hahnemann with the help of his friend, physician Wanger included him in his practice. After Wanger’s death Hahnemann mostly focused on writing. One of the most important writings of this time was the famous wine – test, a method used to detect poisonous lead used as a sweetener in wine. In 1789, he again moved to Leipzig, in order to be closer to the “Source of Science’ as he describes it.

In 1792, Hahnemann founded the first homoeopathic institution for mentally ill patients in Georgenthal. Here Hahnemann treated only one patient, Klockenbring, for which he received 1000 thaler, a considerable amount at that time. Hahnemann gave to Klockenbring remedies which were homoeopathic and chosen according to homoeopathic principles, though homoeopathy itself had not yet been invented. Here on 29th July, 1792 Hahnemann’s wife gave birth to twins.  Later on family moved to Molschleben, 25 Km away from Georgenthal.

From June to August 1801, Hahnemann and his family lived in town of Machern, four hours away from Leipzig. In September 1801 he moved to Eilenburg. During this time Hahnemann was attracted to FREEMASON and he was very much involved with it, as seen from some of his associatins during his stay in these towns.

Hahnemann & His family moved to Torgau around Christmas of 1804 after purchasing a farm in Schildau, hoping that there will be an end to their food shortages. Unfortunately Hahnemann’s income was not enough to pay off the remaining property debt as he was seeing on an average one patient every other day which was not sufficient to support a family of eleven. He, thus reluctantly gave up country life once again and moved to a “Freihaus” in Torgau.

Dr. Hahnemannn began his practice in Torgau where number of his patients steadily increased. He started becoming famous. And by 1811, he was a well known doctor in the vicinity of Torgau and other nearby towns. During his life in Torgau His 16 year old daughter Karoline died on 13th April, 1807 possibly due to Typhus. While his oldest daughter Henriette got married and son Friedrich, moved to Leipzig to pursue his studies. He than moved to Leipzig on 28 August 1811, 34 years after his first visit there, due to circumstances which were, as felt by him, not suitable for him and his family. In 1813, the Leipzig was caught up in war against Napoleon. In this war of liberation, approx. 130,000 were killed and thousand were wounded.Hahnemann was able and had to expand his medical knowledge in treating the wounded. In 1814 he wrote an article in which he suggested the Homoeopathic remedy Bryonia Alba for the treatment of typhus as well as Hyocyamus Niger for serious cases. Hahnemann’s good reputation grew more and more.

On December 16th 1819, after death of his patient, Austrian Field Marshal ‘Karl Philipp Furst von Schwarzenberg’ while he was under treatment of Hahnemann, three phramacists filed a lawsuit against Hahnemann in order to prohibit him from manufacturing Homoeopathic medicines. He was banned and put penalty on. He appealed the judgement before the Saxon King which did not help him. After this defeat Hahnemann left the Leipzig and moved to Kothen in April of 1821, where he was still allowed to make his own Homoeopathic medicines.

On 2nd April, 1821, after being granted permission to manufacture medicines Hahnemann was moved to Kothen with his wife and 10 remaining children. He lived there in house on wallstrasse No. 217 (today no. 47). It was a street where well-to-do citizens used to live. The start of his practice was promising. He had many successful treatments. Duke of the Kothen and his family were also there in the list of patients to Hanemann. That placed Hahnemann on a very reputed position in Kothen. He was alos consulting regarding Diet and life style modifications of his patients. Here only he started experimenting with higher potencies. From 1827 he introduced a term called “potentization”. Meanwhile he published his book “CHRONIC DISEASES” in 1828 based on his experiences regarding faliures and difficulties in treatment of chronic diseases. He wrote regarding this as “the begining was positive, it continued to be less favourable and ended hopelessly”. Here later on while investigating such conditions he came to a conclusion and referred to the origin and trigger of such chronic diseases as “MIASMS”. For the second time after Organon which he wrote two decades earlier and 4th and 5th editions of which was published during his time in Kothen, Hahnemann revolutionised the idea of disease, their causes and healing options. During this period many special people came in his life such as Bonninghausen, Griebelich, Jahr etc. which followed his principles till last.

On august 10, 1829 Hahnemann celebrated 5oth Anniversary of his doctorate. He was honored extensively and received financial benefits which laid down the foundation for a homoeopathic hospital. After a few months later on March 31, 1831 his wife died unexpectedly after a marriage life of 48 years. Hahnemann was of 80 by than. Death of his wife was a severe loss to him. In 1843, amongst many patients that year there was MARIE MELANIE D’HERVILLY GOHIER (age 34) who came to see Hahnemann for the treatmentof a nervous condition. A few months later, on January 18th 1835, they both got married and started living in the house on Wallstrasse. After living in the Kothen for another six months, he departed for Paris on June 14th.